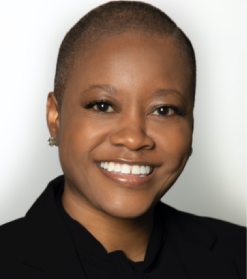 Erica Fatima is an associate at Rock, Fusco & Connelly and concentrates in federal civil rights litigation. Erica graduated from the University of Illinois Chicago School of Law (UIC Law) with honors and is a National Member of the Order of Barristers.

While in law school, Erica externed with the Illinois Attorney General’s Office, Civil Appeals Division. She also completed a judicial clerkship with the Honorable Allen P. Walker in the Office of the Chief Judge, Circuit Court of Cook County, Chancery Division. Prior to her judicial clerkship, she interned as a law clerk with the City of Chicago Department of Law, Federal Civil Rights Litigation Division.

Erica was a respected leader on campus. She served as the first law student elected as a Senator to the University of Illinois Senate Executive Committee. She also demonstrated her commitment to service for others through her tenacious civil rights advocacy – demanding parity for Black law students, and students of color, and collaborating in social-justice equity initiatives for all students.

Erica is an ardent legal researcher with several published works to her credit. Her paper, “The Year Of Jubilee” –– Released Citizen Restoration and Re-Enfranchisement Act, was selected as a chapter in the book, Readings in Restorative Justice (Murphy, Seng, Trendle; Vandeplas Publishing 2021). Her research explores the deleterious effects that permanent felony records levy on US citizens, especially within African American communities. She believes her proposed mitigation strategies can reduce some of the collateral impacts that felonies impose.

Erica was also a research assistant for UIC Law professor, Hugh Mundy. She worked on a national Anti-Racism and Social Justice grant-funded project, which focused on reform to Federal Rule of Evidence 609. Their scholarship was later published as an op-ed in the Chicago Daily Law Bulletin. See https://news.jmls.uic.edu/featured-news/professor-mundy-and-2l-erica-fatima-publish-article-in-cdlb-focusing-on-justice-reform-and-evidence-rules/.

A native of Chicago, IL, Erica earned her BA in Mass Media Communications from DePaul University. Following a decade of successful government public relations work in Atlanta, GA, Erica boldly decided to leave the PR industry in pursuit of a life goal – becoming an attorney. She returned to her beloved City of Chicago to accomplish her goal. Notably, prior to attending law school, Erica became the first African American woman appointed the Director of Communications for a GA county government established in 1867. Before her directorship, Erica served as the Deputy Press Secretary for the Georgia Department of Transportation.

Erica has one son, Ethan. “He is my life’s best gift.”